This page introduces how to use the Agora Web SDK to implement the live video streaming.

You can use the LocalTrack and RemoteTrack objects to publish and subscirbe to audio and video tracks in the channel.

We provide an open-source sample project on GitHub for your reference.

You can also use this online demo app and try the audio and video functions implemented by the Agora SDK.

Choose either of the following methods to integrate the Agora Web SDK into your project.

Method 2: Through the CDN

Add the following code to the line before <style> in your project.

Congratulations! You have successfully set up the project. Next, we'll call the core APIs of the Agora Web SDK to implement basic audio and video real-time communications.

When using the Web SDK, you need to work with the following two types of objects:

A media stream consists of an audio track and/or a video track. The Web SDK controls the stream by operating the tracks.

The process of implementing a basic video call is as follows:

Perform the following steps when a remote user joins the channel and publishes tracks:

The following figure shows the API call sequence of the basic interactive streaming. Note that these methods apply to different objects. 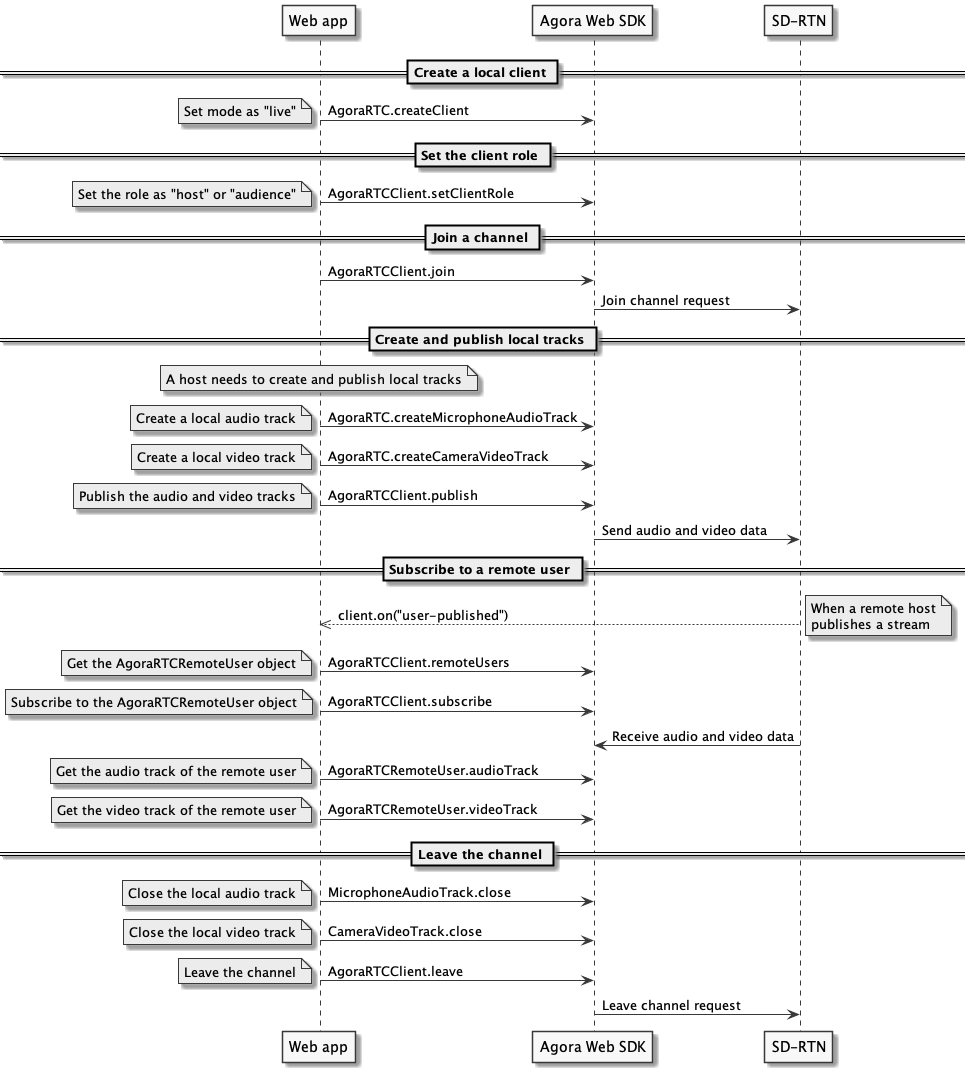 Call createClient to create a local client object.
Pay attention to the settings of the mode and codec parameters when creating the client:

A live streaming channel has two client roles: host and audience, and the default role is audience. After setting the channel profile to "live", you can setClientRole to set the user role.

In a live streaming channel, only the host can be heard and seen. You can also call setClientRole to change the user role after joining a channel.

Pay attention to the following parameters when joining the channel:

For more details on the parameter settings, see AgoraRTCClient.join.

4. Create and publish the local tracks

The above code snippet shows the whole process of creating and publishing the local audio and video tracks:

For more details on how to set the parameters, see:

When a remote user publishes media tracks, the SDK triggers the client.on("user-published") event, from which you can get an AgoraRTCRemoteUser object. Listen for this event with client.on and call AgoraRTCClient.subscribe in the callback to subscribe to this remote user.

Agora recommends listening for events immediately after creating the client to ensure we do not miss any event.

Add the following code snippet after callingcreateClient to listen for the client.on("user-published") event, subscribe to the remote user who publishes media tracks, and automatically play the media tracks.

Pay attention to the mediaType parameter of the client.on("user-published") event, which marks the type of the current track the remote user publishes:

When the remote user unpublishes a media track or leaves the channel, the SDK triggers the client.on("user-unpublished") event. You need to destroy the dynamically created DIV container.