This article describes how to integrate the Agora Cocos Creator SDK and implement the basic interactive live audio streaming in your app.

Use the following steps to build a project from scratch:

After integrating the Agora Cocos Creator SDK, Cocos Creator automatically adds codes in your project for obtaining device permissions, so you do not need to write these codes yourself.

Cocos Creator also uses your Cocos Creator account to automatically register an Agora account and create an Agora project. You can click Dashboard on the Agora RTC panel to visit Agora Console.

Agora automatically assigns each project an App ID as a unique identifier.

To copy this App ID, find your project on the Project Management page in Agora Console, and click the copy icon to the right of the App ID.

Temporary tokens are for demonstration and testing purposes only, and remain valid for 24 hours. In a production environment, you need to deploy your own server for generating tokens. For details, see Authenticate Your Users with Tokens.

Once the project is set up, create a component script and a scene based on your requirements, and add the script into the scene node. See Creating and using component script.

You can use core APIs of the Agora Cocos Creator SDK in a component script to implement the basic interactive live audio streaming function. The following figure shows the API call sequence: 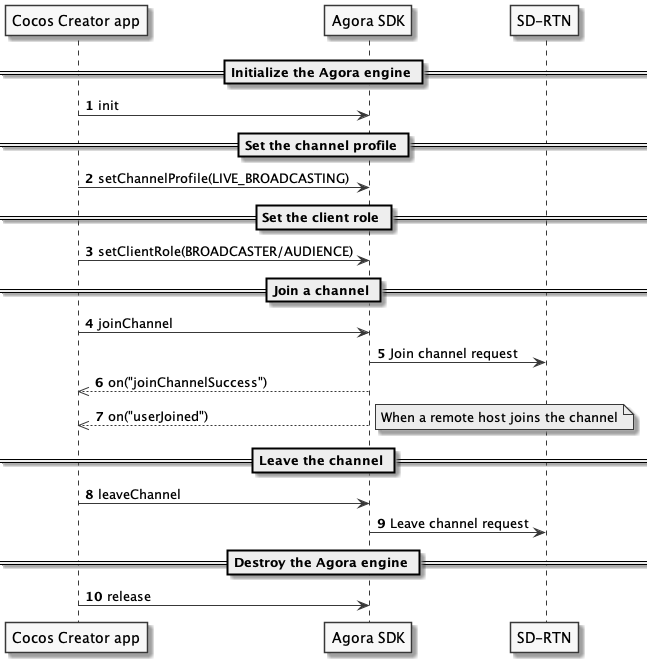 Create a user interface (UI) for the interactive live audio streaming in your project. If you already have a UI in your project, skip to Initialize the Agora engine.

Agora recommends adding the following elements to the UI:

Initialize the Agora engine before calling any other Agora APIs. You need to pass in the App ID of your Agora project in this step. See Get the Agora App ID.

Call init and pass in the App ID to initialize the Agora engine.

According to your requirements, you can also listen for callback events in this step, such as when the local user joins or leaves the channel.

After initializing the Agora engine, call setChannelProfile to set the channel profile as LIVE_BROADCASTING.

If you want to switch to another profile, destroy the current Agora engine with the release method and reinitialize the Agora engine before calling setChannelProfile.

An interactive streaming channel has two client roles: BROADCASTER and AUDIENCE; and the default role is AUDIENCE. After setting the channel profile to LIVE_BROADCASTING, your app may use the following steps to set the client role:

Note that during the interactive live audio streaming, only the host can be heard. If you want to switch the client role after joining the channel, call the setClientRole method.

After setting the client role, you can call joinChannel to join a channel. You need to generate a token to replace YOUR_TOKEN in the code sample below.

Once the user joins the channel, the user subscribes to the audio streams of all the other users in the channel by default, giving rise to usage and billing calculation. If you do not want to subscribe to a specified stream or all remote streams, call the mute methods accordingly.

According to your scenario, such as when the interactive live audio streaming ends and when you need to close the app, call leaveChannel to leave the current channel.

Agora recommends running and debugging your project through a real Android or iOS device. See Compile and preview.

When the interactive live audio streaming starts successfully, audience members can hear the voice of hosts in the app.

Agora provide an open-source Voice-Call-for-Mobile-Gaming sample project on GitHub that implements the basic one-to-one voice call. You can refer to this sample project and the sample code in this article to implement the interactive live audio streaming.