Security and compliance are essential for real-time engagements through technology. In order to provide safe and reliable cloud services, Agora adheres to the compliance requirements of different countries, regions, and industries, in addition to being certified to ISO/IEC 27001. For more information, see ISO Certificates.

Agora products and services are designed and built with multiple protection measures against attacks commonly seen in the real-time engagement industry. This article describes some of the security best practices that Agora has adopted, as well as security tools it provides for developers, as follows:

The channels architect is the first built-in layer of protection. Agora creates an independent and isolated channel for each audio, video, or messaging data transmission. All channels are logically separated and only authenticated users from the same App ID can join the same channel.

The second layer of protection is on the authentication layer. This is done via using the dynamic token authentication. The token is a short-lived access key, which is generated by the app backend and allows users to access the Agora platform after the user is properly validated by the app.

A token is generated with important information such as App ID, user ID (uid), channel name, and expiration date. 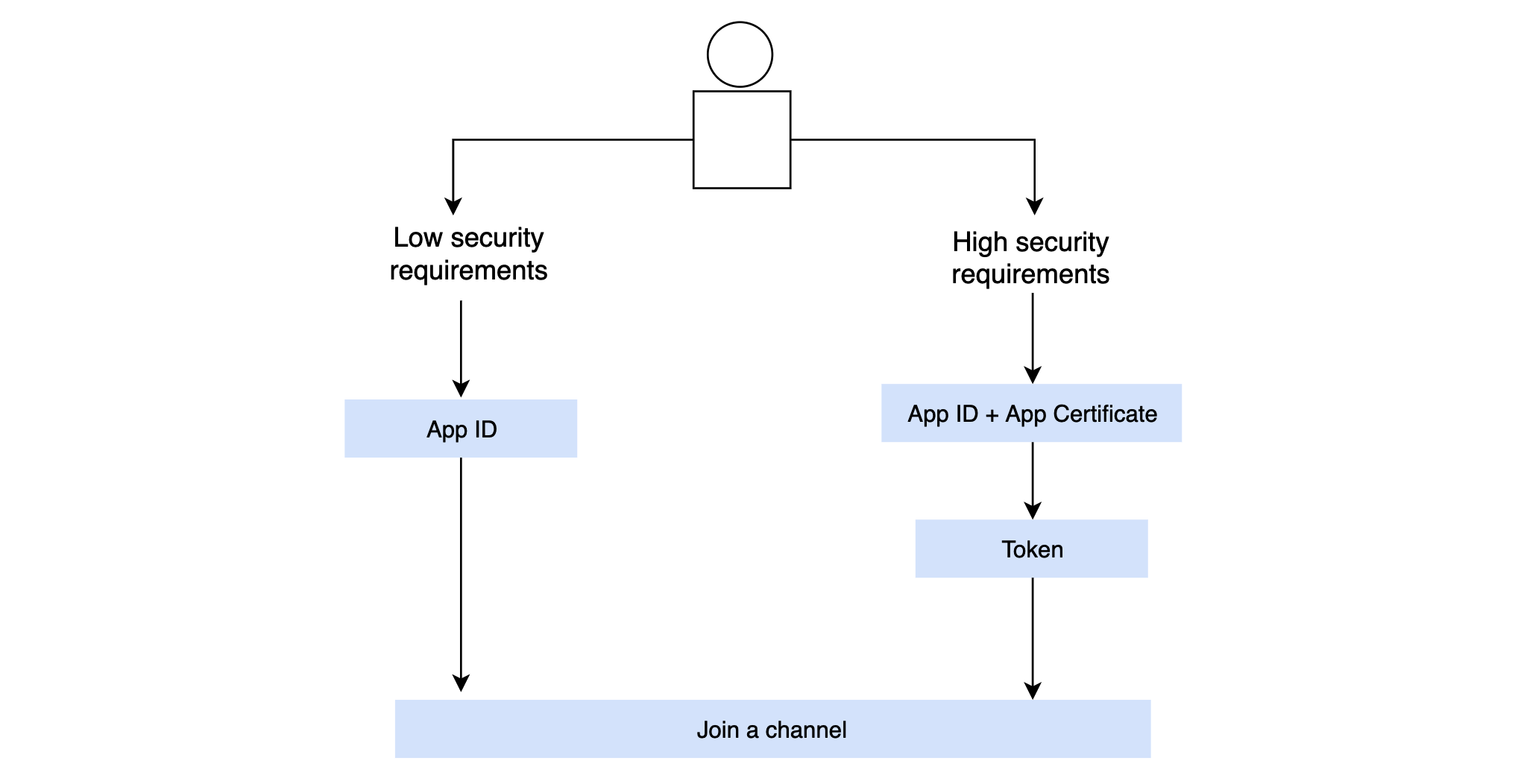 The app developer can enable token authentication (App Certificate) on Console. When enabled, all user’s request to join a channel must be done with a valid token.

The next layer of security in the Agora platform is encrytion. Agora supports transmission encryption and data encryption.

Data encryption encrypts all the audio and video streams with a symmetric key and encryption controlled by the app developer. In this level the app provides a symmetric encryption key to the local SDK libraries.

The SDK encrypts all the captured media using the key and the configured encryptions using AES 128/256 (based on configuration). The data is sent encrypted to Agora SD-RTNTM and from there to the other endpoints in the channel. The receiving endpoint will use the key provided by the app layer to decrypt the media streams and send to the renders. With this method, only the application knows the keys. In the Native SDK (iOS, Android, Mac, Windows) the keys are not sent to Agora servers.

When using Other Agora services like Web SDK, Cloud Recording, Content Moderation, Transcoding etc, encryption is done a bit differently and it is not end-to-end. In this case media is still encrypted but the Agora service needs to be aware of the key to be able to connect to the channel and provide service. For example, in Web SDK the User/Browser protection is done via the web-server protection (HTTPS) as well as the WebRTC standard, security practice (encryption, key management etc). More information on WebRTC security can be found here https://webrtc-security.github.io/.

The media encryption on Web SDK is done via WebRTC standard but the interoperability to Agora is done using Agora’s encryption engine and the encryption key is passed securely to the Web SDK servers via the APIs. The key is required as the Agora edge server will convert from WebRTC protocols to Agora’s protocol and allow interoperability with Native SDK. Similar situation happens with Cloud Recording, Content Moderation etc., where the Restful APIs are used to securely pass the key for the channel.

Refer to the following guides for descriptions of how to enable encryption:

To conform to the laws and regulations of different countries and regions, the Agora RTC SDK and the RTM SDK support network geofencing, which limits the transmission of data to within a specified region.

Refer to the following guides for descriptions of how to use network geofencing:

Use this list to quickly check what measures you have or have not taken to best protect the security of you app and users: