When you enter a whiteboard room, you see a page that extends infinitely in all directions. Agora Interactive Whiteboard calls this page a scene. On a scene, you can write and draw, insert an image, and present a dynamic PPT slide. In a whiteboard room, you can add multiple scenes, switch between scenes, and move a scene. These capabilities enable you to implement advanced functions such as displaying a complete PPT file on the whiteboard.

This page introduces the scene structure, scene identification, the contents that can be displayed on a scene, and the rules for adding, deleting, and modifying a scene. Once you grasp these basic concepts, you can build an interactive whiteboard application with multiple scenes according to your business needs.

The whiteboard room supports displaying a specific scene, but not a scene directory. The room can display one scene at a time. 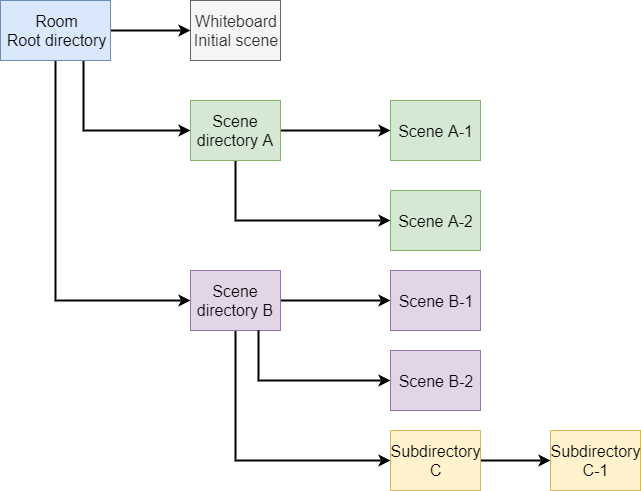 For example, if you insert a scene directory named Math that contains scenes ClassA and ClassB in the root directory, then the paths of the new scene directory and scenes are as follows:

On a whiteboard scene, in addition to writing and drawing by using the whiteboard tools, you can also display images or web pages in the following formats:

By calling APIs of the whiteboard SDK, you can add, delete, and move scenes. The rules for managing a scene are as follows:

When you add a new scene, the SDK performs one of the following operations, depending on the path of the new scene:

Scenes are ordered, but scene directories are not. You can call the API to move a specified scene, but you cannot change the position of a scene directory through the API.

The following example demonstrates the rules for adding and deleting scenes:

Assuming the current whiteboard room is new, it has only the root scene directory / and the scene /init.

Subsequently, when you add a new scene with path /math/class-B, the SDK directly adds the new scene to the /math scene directory.

When you delete the /math/class-A scene, the SDK removes the scene class-A from the /math scene directory.

After that, when you delete the /math/class-B scene, the SDK automatically deletes the /math scene directory because all the scenes in that directory are deleted.