For calls and events that require high quality audio and video, best practice is to ensure that the hardware your app is running on and the last mile between the device and Agora Platform are good enough to assure the quality you require. This improves the user experience and helps you troubleshoot.

This page shows you how to implement device and network tests in your app.

In telecommunications, a probe is an action taken or an object used for the purpose of learning something about the state of the network. For example, an empty message can be sent simply to see whether the destination actually exists.

The following measures are important:

A device test checks if audio captured from a device can be played back after the it has passed through a network. The Agora tests captures audio from the device microphone, sends it to Agora Platform with a defined wait time. For example, five seconds. After the wait time Agora Platform sends the audio back to the device and it is played to the device loudspeaker. You can then judge if the audio is of adequate quality.

The SDK provides the startEchoTest method that tests whether the network connection and the audio devices, such as the microphone and the speakers, are working properly.

The startLastmileProbeTest method probes the last-mile network before joining a channel and returns statistics about the network quality, including round-trip latency, packet loss rate, and network bandwidth.

The API call sequence is as follows: 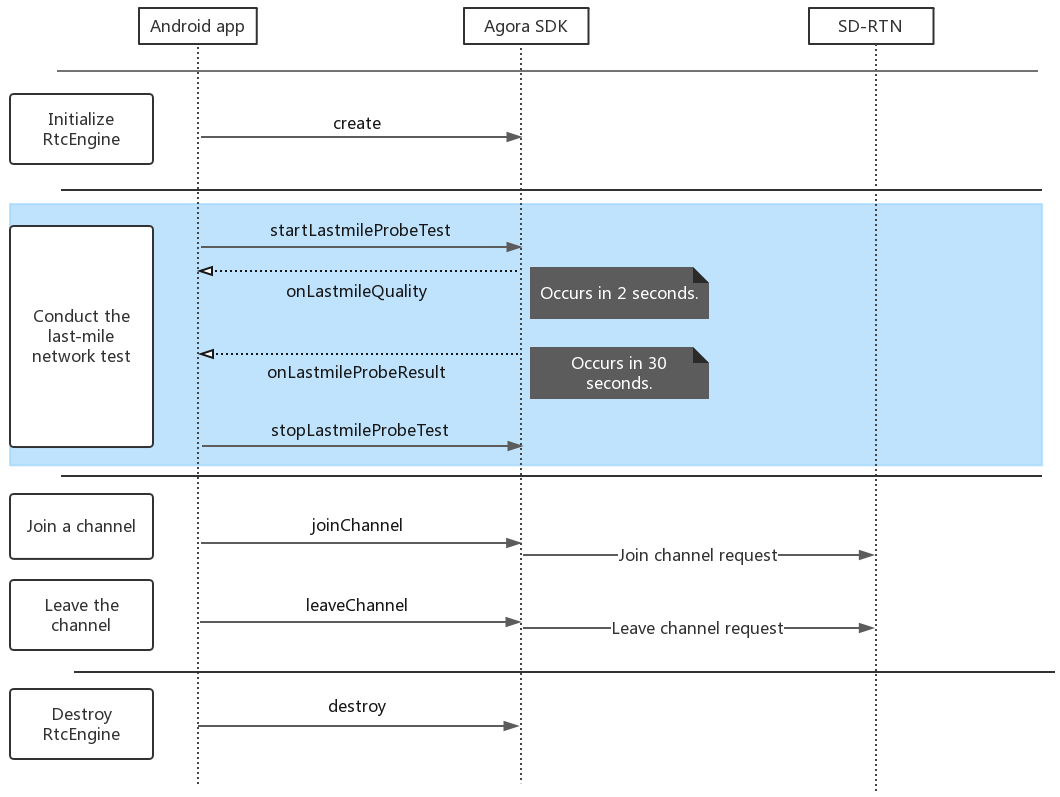 Before proceeding, ensure that you have implemented basic real-time functions in your project. See Start a Call or Start Interactive Live Streaming.

To implement pre-call testing in your project, refer to the following steps.

To start an echo test, refer to the following steps.

Refer to the following code to implement the device test in your project.

To implement the network probe test, refer to the following steps.

Refer to the following code to implement the last-mile test in your project.

This section includes in depth information about the methods you used in this page, and links to related pages.