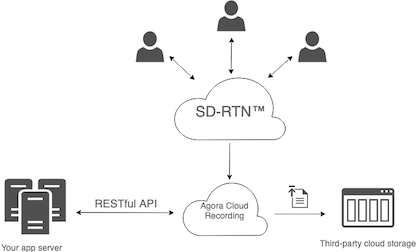 With the RESTful APIs, you can send requests to do the following:

If you need to use the callback service, see RESTful API Callbacks for details.

Now, you can use Agora Cloud Recording and see the usage statistics.

The following figure shows the API call sequence of a cloud recording.

The query, update, and updateLayout methods are not mandatory, and can be called multiple times during the recording (after starting recording and before stopping recording). 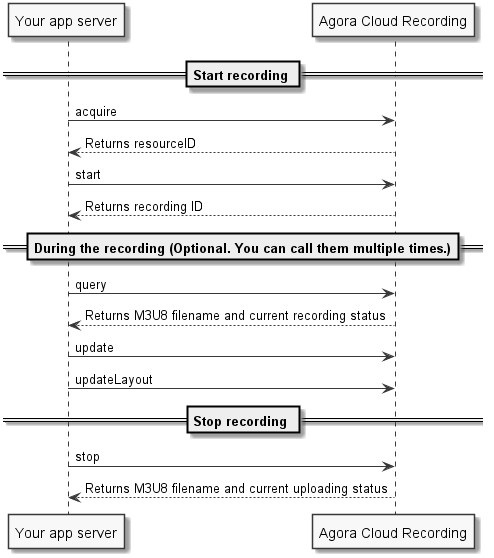 Get a resource ID

Call the acquire method to request a resource ID for cloud recording.

If this method call succeeds, you get a resource ID (resourceId) from the HTTP response body. The resource ID is valid for five minutes, so you need to start recording with this resource ID within five minutes.

One resource ID can only be used for one recording session.

Call the start method within five minutes after getting the resource ID to join a channel and start the recording.

Agora Cloud Recording does not support string user IDs (User Accounts). Ensure that every user in the channel has an integer UID. When you call the start method, ensure that the UID in the quotation marks is an integer UID, too.

If this method call succeeds, you get a recording ID (sid) from the HTTP response body. See Best Practices in Integrating Cloud Recording for details about ensuring the recording service starts successfully.

If this method call succeeds, you get the M3U8 filename and the current recording status from the HTTP response body. See Best Practices in Integrating Cloud Recording for details about monitoring service status and getting the M3U8 filename.

During the recording, you can call the updateLayout method to set or update the video layout. See Set Video Layout for details.

Call the stop method to stop the recording.

If this method call succeeds, you get the M3U8 filename and the current uploading status from the HTTP response body.

Upload and manage the recorded files

After the recording starts, the Agora server automatically splits the recorded content into multiple TS/WebM files and keeps uploading them to the third-party cloud storage until the recording stops.

Playlist of the recorded files

In individual recording mode, if you choose to record audio or video only, each recording session generates one M3U8 file; if you record both audio and video, each recording session generates two M3U8 files. The M3U8 file is a playlist pointing to all the split TS/WebM files of the recording. You can use the M3U8 file to play and manage the recorded files. For detailed information about the naming conventions of the M3U8 and TS/WebM files in individual recording mode, see Manage Recorded Files.

In composite recording mode, each recording session generates one M3U8 file. The name of the M3U8 file is sid_cname.m3u8, which consists of the recording ID and the channel name. For more information, see Manage Recorded Files.

During the recording, the SDK triggers the following callback once every minute:

After the recording stops, the SDK triggers one of the following callbacks:

The following are some common errors:

See the following if you have other issues using Agora Cloud Recording:

Agora provides a Postman collection, which contains sample RESTful API requests for a cloud recording. You can use the collection to get a quick start of the basic functionalities of the Cloud Recording RESTful APIs. All you need to do is to import the collection to Postman and set your environment variables.

You can also use Postman to generate code snippets written in various programming languages. To do so, select a request, click Code, and select the desired language in GENERATE CODE SNIPPETS.

The following is the sample code in Python for your reference.