In a call or live interactive streaming, you may need to play custom audio or music files to all the users in the channel. For example, adding sound effects in a game, or playing background music. We provide two groups of methods for playing audio effect files and audio mixing.

Before proceeding, ensure that you have implemented basic real-time functions in your project. See Start a Call or Start Live Interactive Streaming for details.

Agora provides an open-source demo project on GitHub that implements audio effect and audio mixing. You can download the project and view the source code.

The play audio effect methods can be used to play ambient sound, such as clapping and gunshots. You can play multiple audio effects at the same time, and preload audio effect files for efficiency. 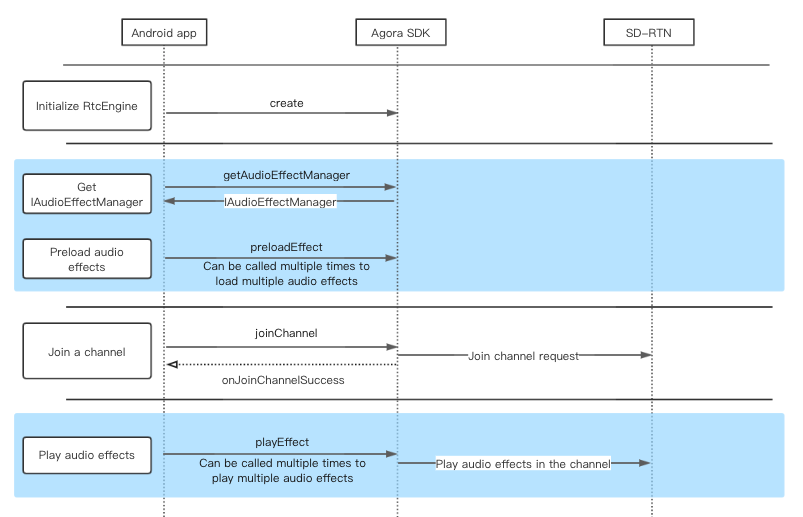 Audio mixing is playing a local or online music file while speaking, so that other users in the channel can hear the music. The audio mixing methods can be used to play background music, for example playing music in interactive live streaming. Only one music file can be played at one time. If you start playing a second music file during audio mixing, the first music file stops playing.
Agora audio mixing supports the following options:

You can also use startAudioMixingPlayoutVolume and adjustAudioMixingPublishVolume to adjust the audio mixing volume for the local and remote playback respectively. The value range of volume is [0, 100].

When playing a music file, you can also refer to the following articles: