The Agora Recording SDK generates recording files in TS format during the recording process in the following scenarios:

In different recording modes, you need to convert and repair the recording files based on the number of crashes in a single recording process, as shown in the following table:

Ensure that the recording files are stored in an accessible directory.

Where recorderDir is the directory of your recording files.

When you run the command, the script searches for all files in TS format in the directory and converts them to MP4 format one by one. In individual recording mode, the script also searches for and repairs the uid_UID_timestamp.txt files.

To convert all the TS files under the 20200915 folder to MP4 format and repair the uid_UID_timestamp.txt files, use the following command:

Before the conversion and repair: 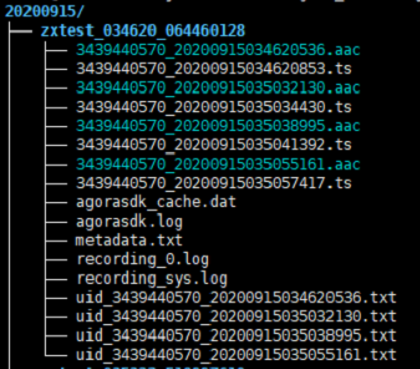 After the conversion and repair:

<  Previous: Watermark Next: Set the Video Profile  >
X
Is this page helpful?
Scored successfully！
Please input your advice
Invalid Email
Thank you for your contribution!